What can you do after LASIK? Congratulations! You’ve just had LASIK! And if you haven’t yet had LASIK, get yourself to a consultation so we can get to this stage already! While there’s little you can do to affect the procedure as we perform it, the bulk of your responsibility in our LASIK partnership begins after you’ve had it. In this post, I’ll introduce you to Bill, who followed all of my advice and had a great visual outcome after LASIK. 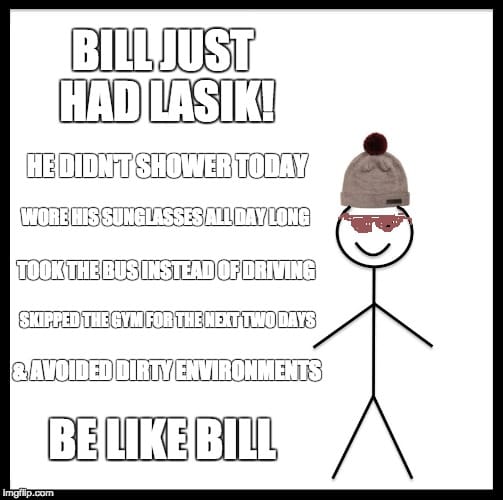 We suggest you avoid a few things after LASIK and PRK. For example:

The take-home message, however, is don’t rub your eyes.

But Doc, what can I do after LASIK?

As long as you follow my advice as I share above (and don’t worry, we’ll remind you about all of this before and after your procedure), there really isn’t much you can’t do.

Just take it easy for a few days to a week. Remember, you just had surgery, so let’s avoid anything that might cause you to have to rub your eyes unnecessarily. That includes hard partying or jostling among crowds too.

After a week or so, you’ll find that what you can now do without glasses and contact lenses far exceeds the few “don’ts” I asked you to heed in the week after LASIK surgery.

So, do you have any related questions to the one we answered just now? Let’s see your question in the comments below and we promise to reply!